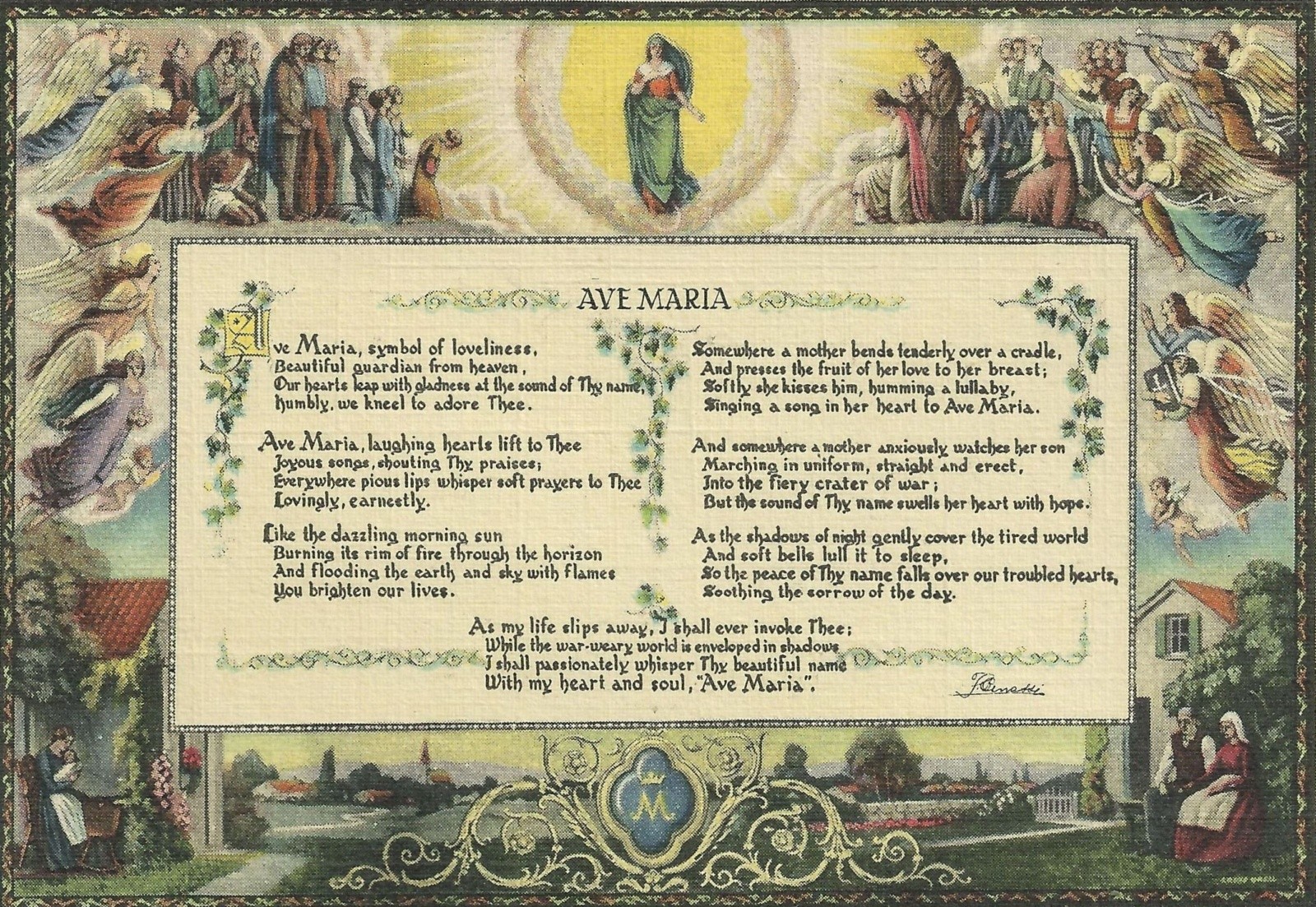 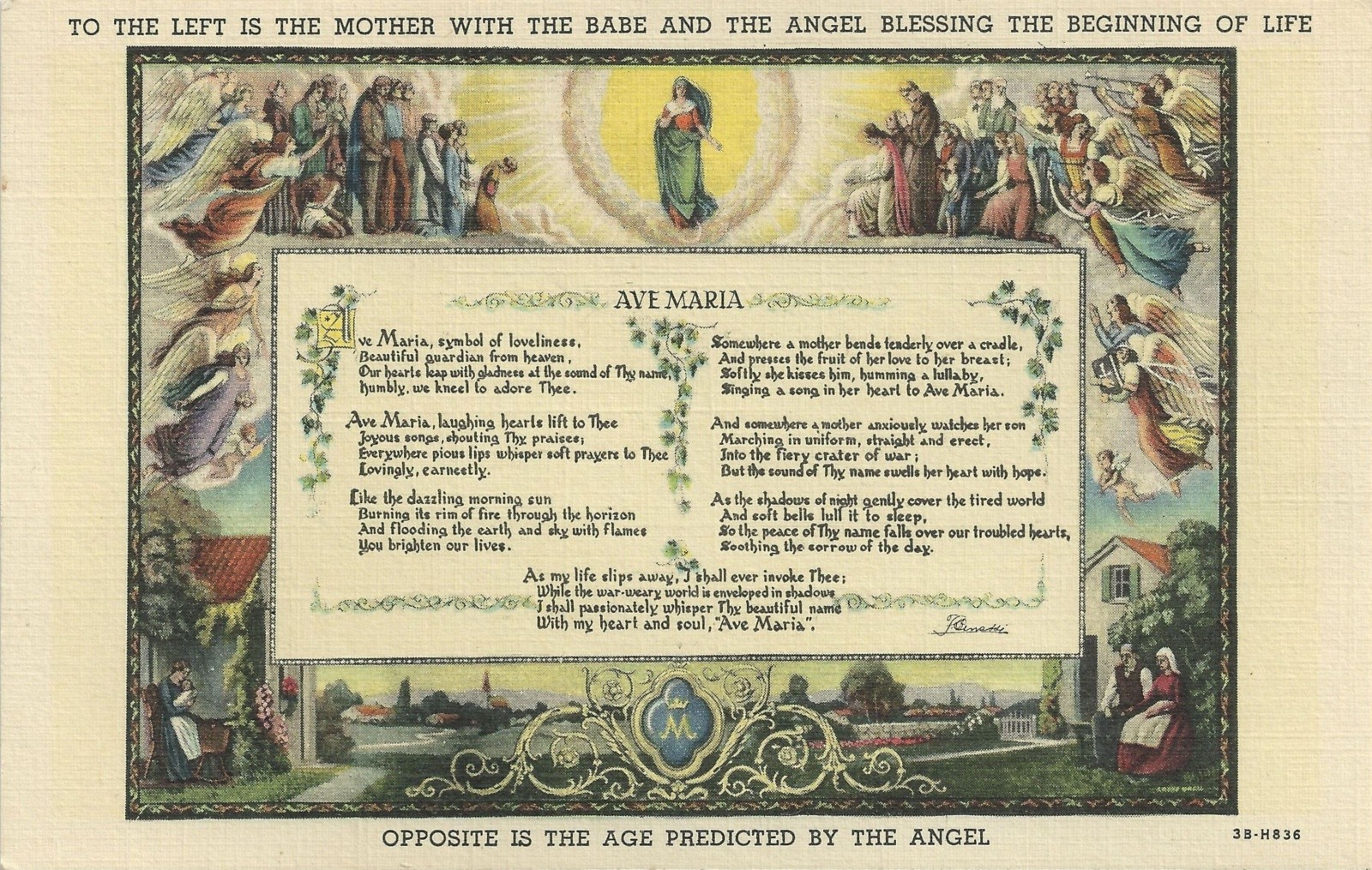 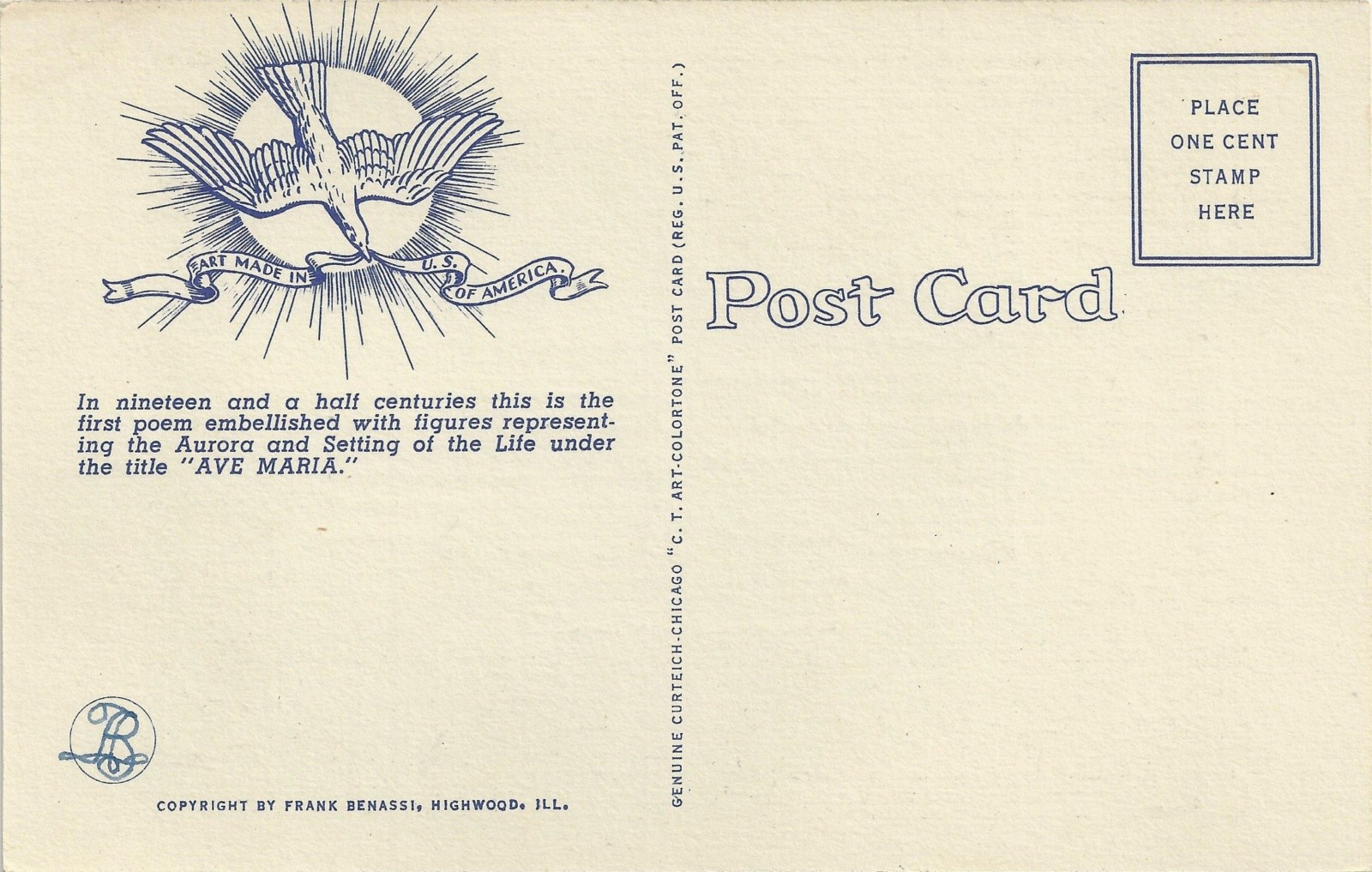 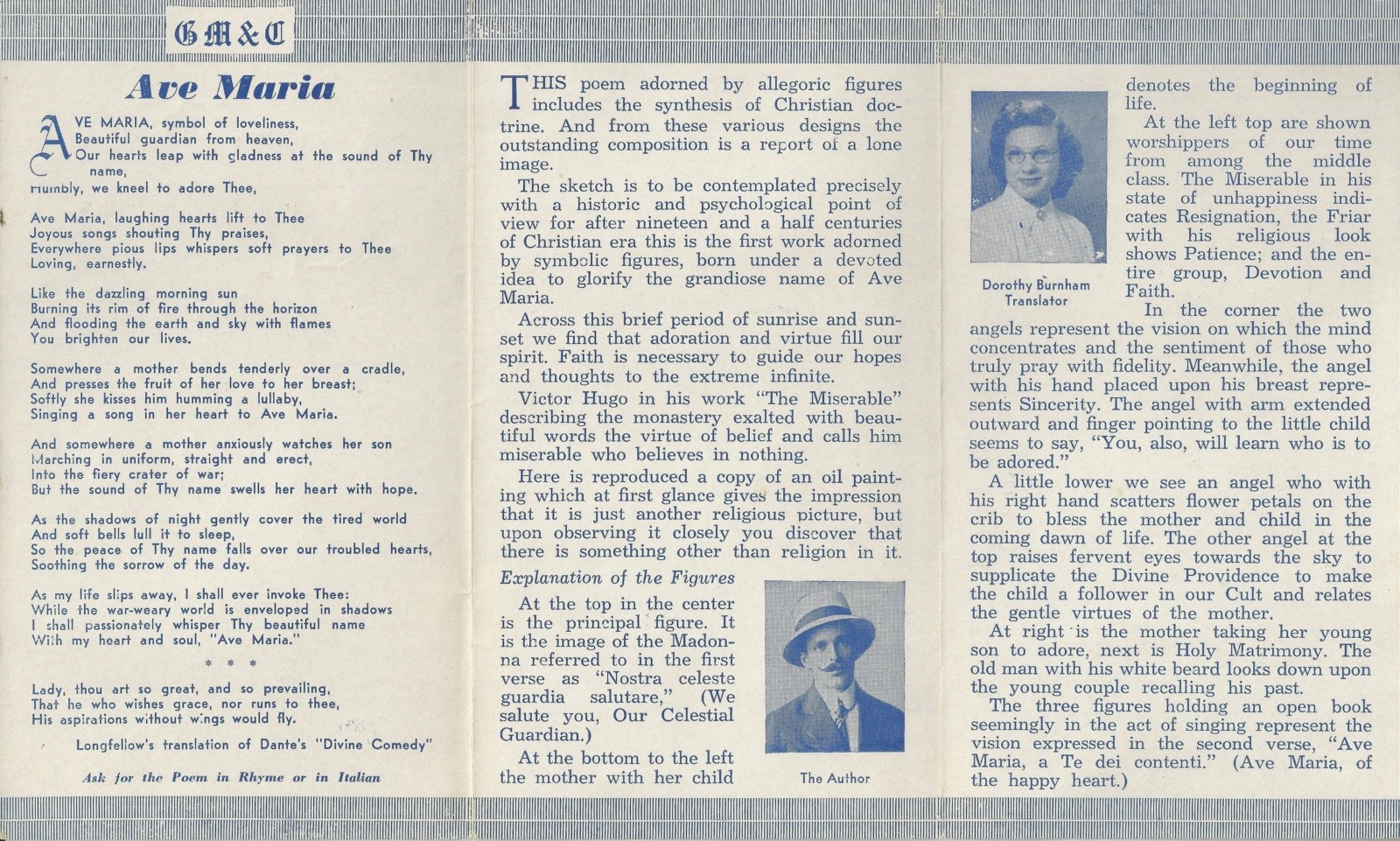 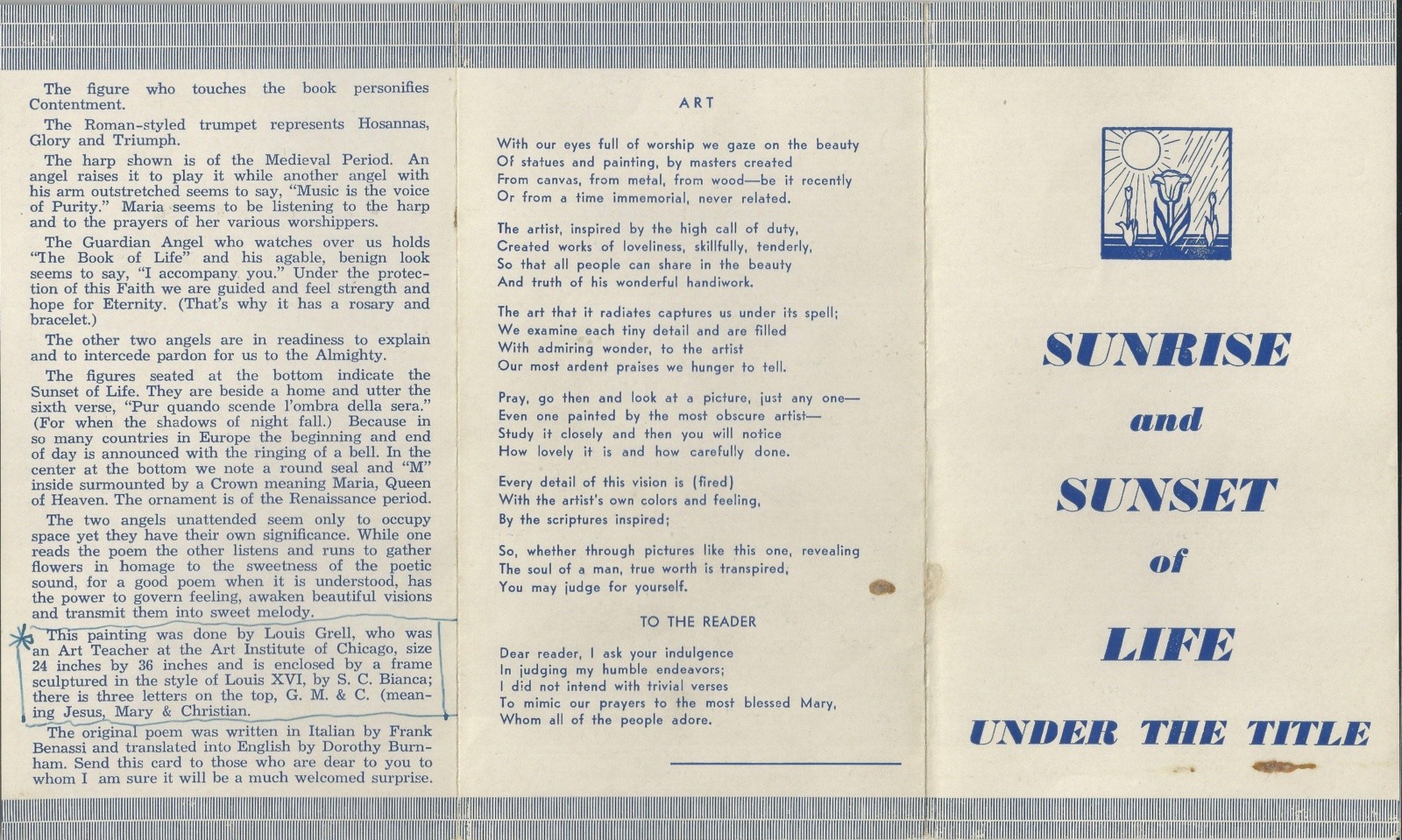 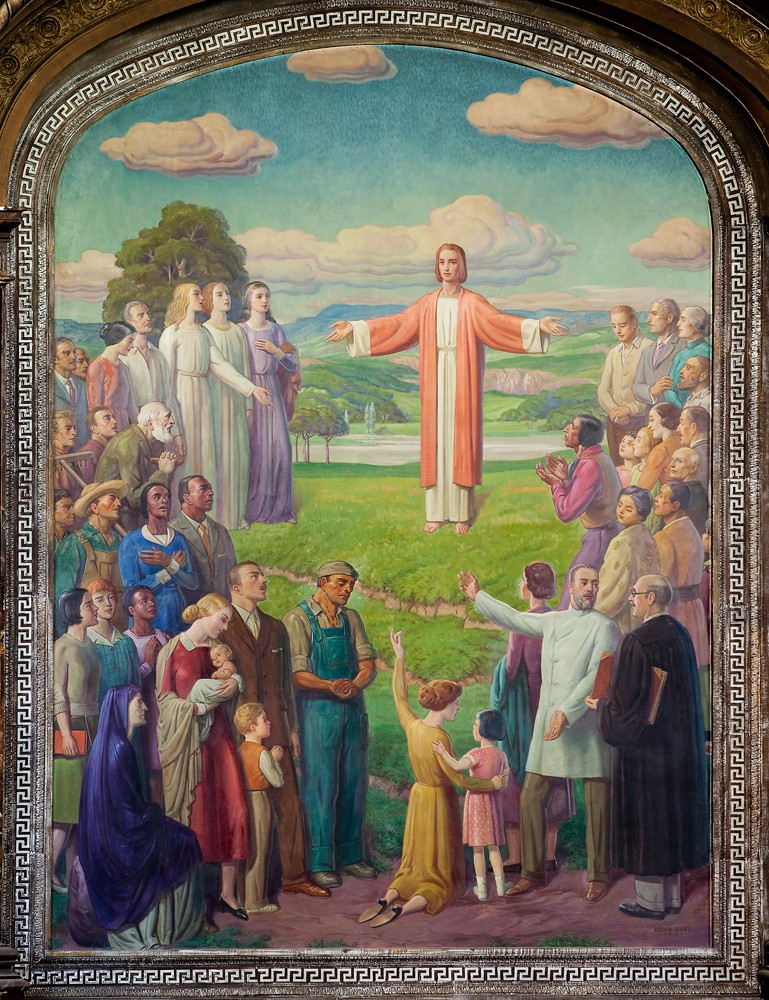 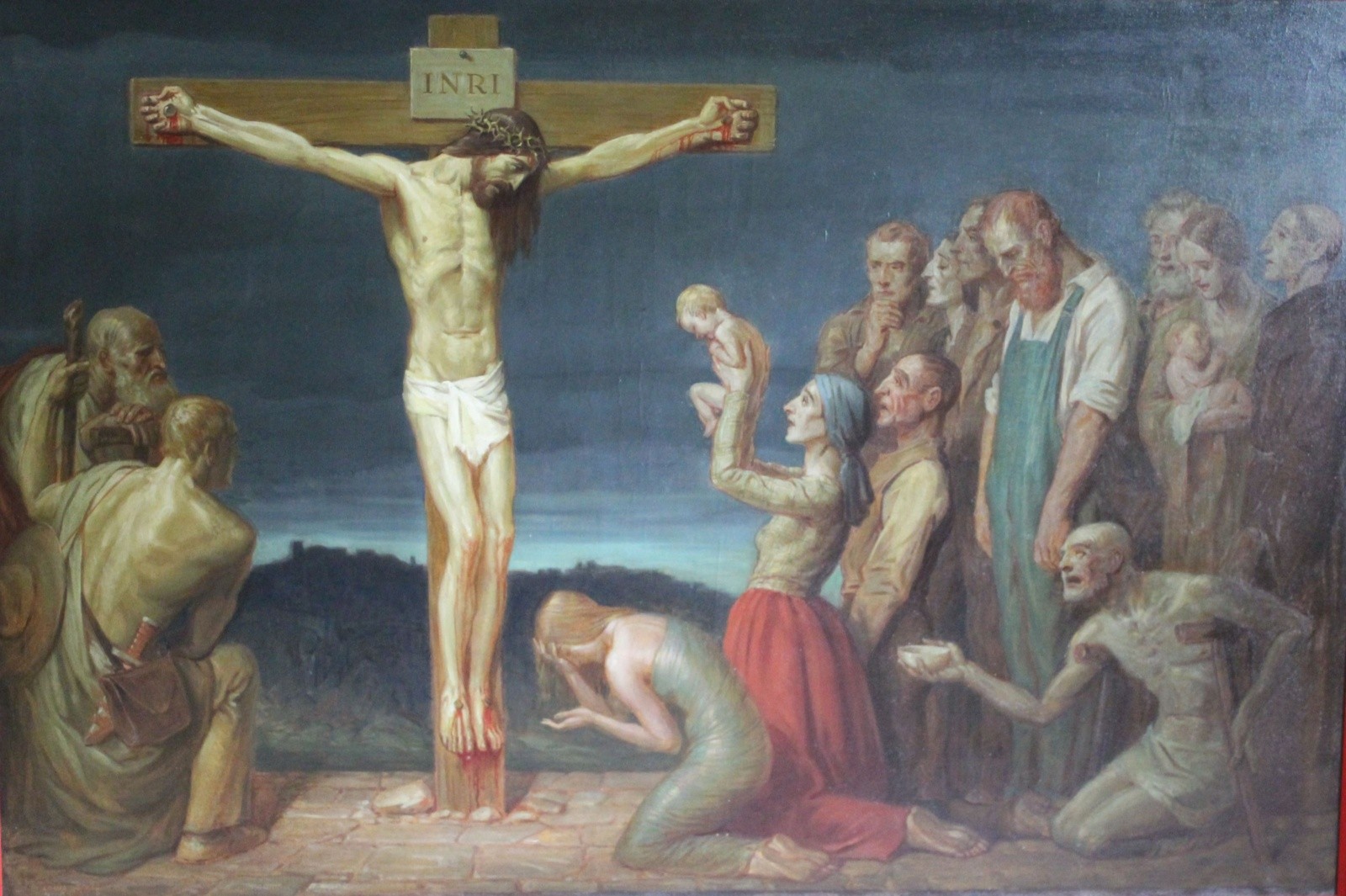 The featured postcard is a reproduction of Grell’s Ave Maria painting completed in 1943 in collaboration with the Italian poet Frank Benassi. Benassi’s poem is painted into the center of the painting with figures surrounding the beautifully hand painted lyrics. The original poem was written in Italian by Benassi and translated by Dorothy Burnham for incorporation into the painting by Grell. The poem, based partially on Dante’s “Divine Comedy” and Victor Hugo’s “The Miserable,” is intended to glorify the beauty of the story of Ave Maria, Latin for Hail Mary-the Catholic Church prayer. According to Benassi, “…after nineteen and a half centuries of Christian era this is the first work adorned by symbolic figures…” placing the painting at 1943. More important is his claim that this work by Grell is the first time we have seen symbolism intentionally incorporated into a Christian themed artwork. Allegorical figures surround the poem representing symbolism in Christian art.

It is estimated that approximately twenty-five percent of Grell’s career work, mostly after 1950, came from religious commissions, yet he was not necessarily a devout religious man. According to relatives he infrequently attended Sunday services. His parents and sister were strong Lutherans; his wife, Friedl a fairly strong Catholic; but Grell studied religion, learning on his own what he needed to understand about the various religious clients he earned commissions from, over decades, to successfully paint murals and paintings.

Ave Maria is a perfect example of one of his many versatile talents that earned him numerous commissions. This particular work has additional symbolic meanings which can be discovered upon further, detailed, study of the piece. With nearly forty-five figures or characters painted into the scene, Grell, as he did with his Keep Looking Up (1959) mural found inside the Peoples Church of Chicago, incorporates a host of figures into a modern day, turn of the century setting. The Ave Maria oil on canvas painting measures 24 inches tall by 36 inches wide.

The principal figure centered in the top of the painting is the image of the Madonna. Working in reverse manner, from sunset to sunrise, from the end to the beginning, clockwise around the poem, are Grell’s renditions of inspirational Christian figures beginning with the Holy Matrimony, represented by the kneeling family with their young son. Standing above the husband and wife, is the old man with his white beard pondering his long and complicated life. Beyond the old man, are three figures holding an open book singing the sounds of the happy heart of the Queen of Heaven, joined by three angels’ blaring the tunes with Roman styled trumpets. Below the trumpet performing angels, is found another angel playing a harp of the Medieval Period, assisted by an angel with an outstretched arm seeming to say that this is the sound of the Queen and purity that she represents. It can be inferred by her slight gaze to her left that Maria is listening to the sounds coming from the harp, paying more attention to the settling of the day and what lies ahead in our future.

In the middle right, below the angelic musical section, are found three more angels, one representing the Guardian Angel holding the ‘Book of Life,’ the other two angels prepared to accept the pardon of forgiveness from the Almighty. Below in the bottom right corner is an older couple, representing the setting of the sun, the Sunset of Life. The “M” found centered at the bottom symbolizes Maria, Queen of Heaven. Notice the modern day community setting, complete with glass windows, tile roofing, picket fencing and streets. Continuing on from the bottom left corner is the building of life, the Sunrise of Life symbolized by the mother holding her newborn baby. Above an angel spreads flower pedals with her right arm onto the building of life blessing the beginning. Above this angel, another holds a hand on her chest symbolizing sincerity. Immediately to Maria’s right, found in the top left corner of the painting are the commoners, worshippers of our time representing the middle class. Found kneeling, towards the rear of the group is The Miserable, postured in a stance of resignation and finality, the Friar representing time and patience-the group as a whole conveys Devotion and Faith.

A similar group of “worshippers of our time” is found in Grell’s oil on canvas painting The Crucifixion (1936) part of the Grell Family collection reproduced below. This painting measures 43 inches tall by 64 ½ wide.

Grell utilized modern people in this profoundly emotional composition; the Miserable, the Friar, the Sunrise of Life are well represented here as in his Ave Maria composition above. The weeping guilt of the woman kneeling can be felt chilling the hairs on your skin as Jesus peers into the soul of the newborn baby comforting those of “all” times.

Grell took anatomy courses as part of his early art training years in Hamburg, and like John Stuart Curry (1897-1946), created large masculine hands to symbolize hard work and authority in important male figures. Here, Jesus is rendered in the last minutes of his human form, caring only for those who wept for his suffering on the cross, not himself.